We celebrate with a special offer: a pack with 3 fuzzies in 2 coats: the Love Orange/White and Love Orange/Black coats. Plus Food, sweets,  shoulder pet and the "Fuzzy Halloween Party" toy for up to 4 fuzzies. 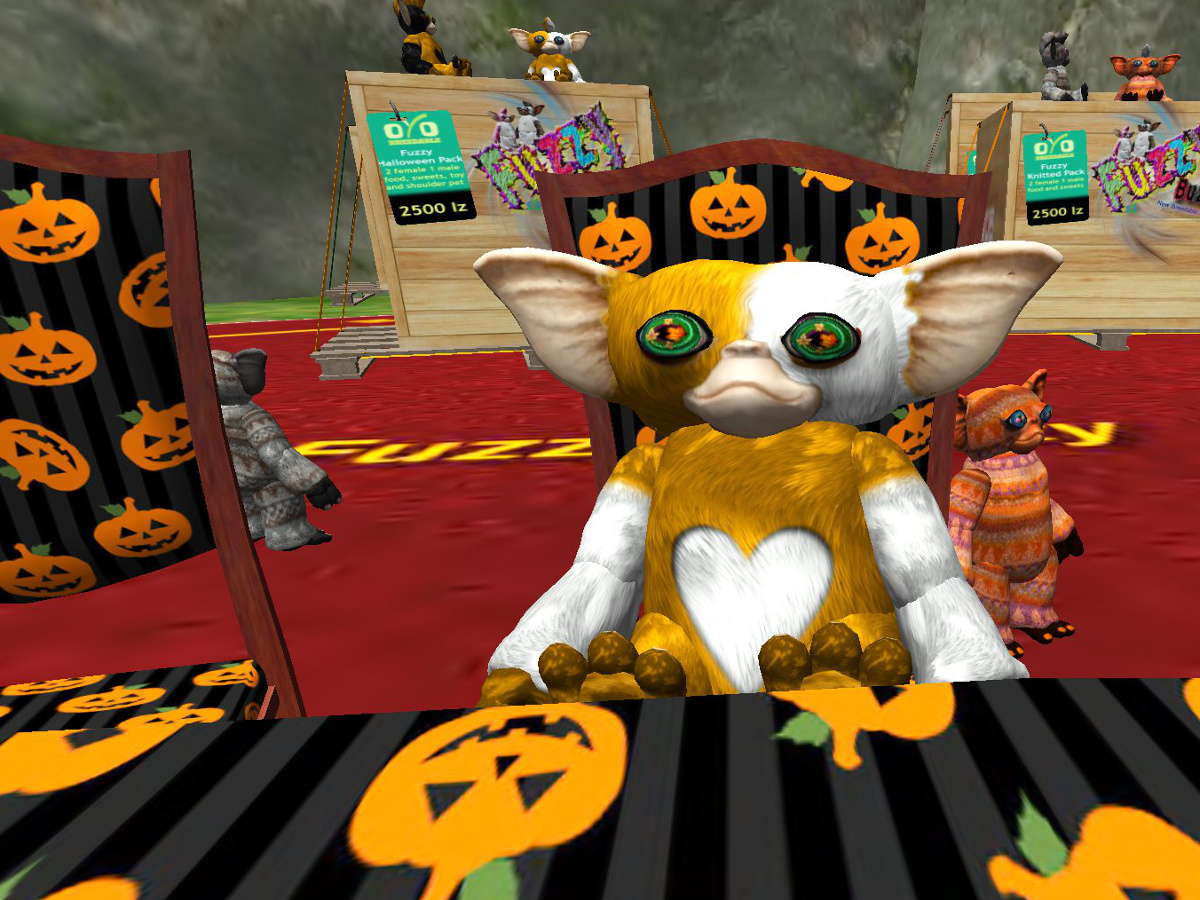 I was asked by many of you if we could make the "Saytome" Horse available for breeding. This Horse was made in memory of our friend and former oYo Manager Saytome Scott who passed away in May 2015.

She influenced us with her competence and committment and she was a specialist for all the coats we strted with.

We still miss her.

Dancing with the Dodos and Dogs!

Dancing with the Dodos and Dogs

That's just what our breeders have been doing inworldz today. Weve just had a Best In Nightwear contest with the competition too close to call that we had not 1 but 9 winners taking a share of the 1000 izzies.

We also had our usual raffles with Summer Rose taking home a dog food pack and a pack of dogs, Star Shackleton won a pack of bones for her dogs and Stang McMasters Also took home a New Indra Dodo.

Feel like you missed out? Dont worry we are doing it all over again tomorrow only this time its from 11am - 2pm with 3 different DJ's and 3,000k on the contest board with a back to school contest. So join us IW. 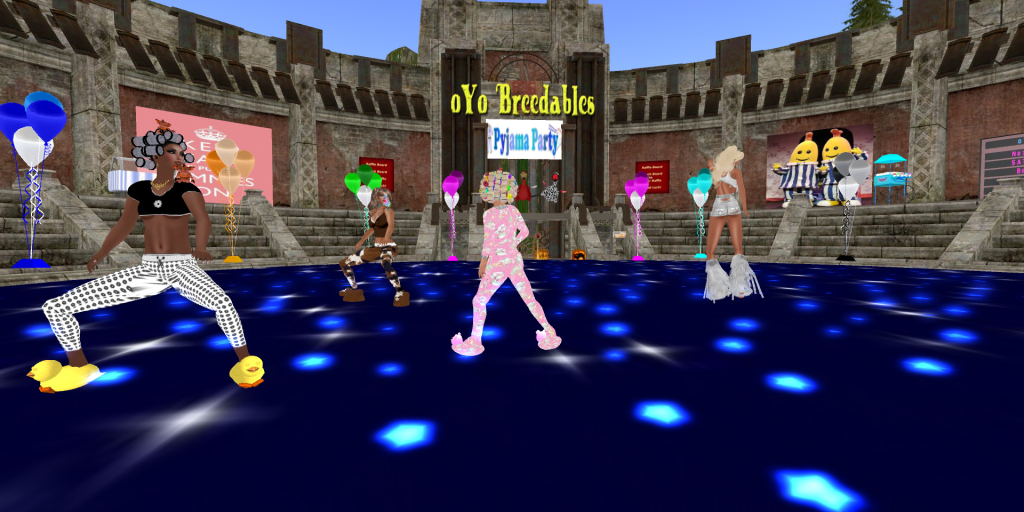 Team oYo have smashed the 500k marker for RFL today, the auction at M&K made 62600 taking us over that 500k and thats just for team oYo thats not the whole of RFL. You guys really do rock and show everyone what an awesome community this is. I thankyou all and hope to see you on wednesday at the RFL oYo Breeders Bash at 12pm.

Special Guest Judge and fellow Breeder Stand McMasters selected the top 3 in the Best In Breed Dodo Contest. The places are:

oYo Reaches for the stars for RFL

oYo Reaches for the stars for RFL

Over recent weeks and at the breeders fair we have auctioned off 20 Unique Unicorns. Each unicorn has one of 5 coats and one of 4 eyes but no 2 are the same. The breeders of oYo showed their support for this project as oYo donated every izzie from the sale of these special unicorns to RFL. The total of these combined with the kind donations from our breeders and staff have given Team oYo a total of over 400,000 Izzies.oYo would like to thank all of their awesome breeders for taking part in this fund raising and helping really make a difference. You can still donate to RFL by dropping some izzies, no matter how big or small, into the RFL terminal which can be found at the events area on the oYo sim. Once again we thank and salute you all.

First ever dodo racing hits inworldz with a waddle!

First ever dodo racing hits Inworldz with a waddle! 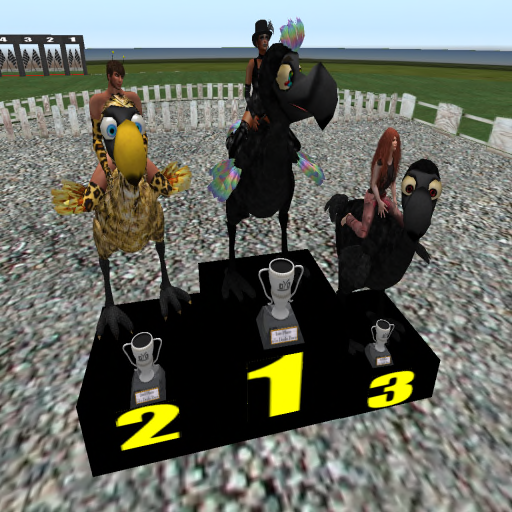 Yes folks the dodo racing has landed and boy oh boy is it fun. Breeders and staff lined up for a fun race today as part of the breeders fair which saw Summer Rose take home first place and a prize of a New Indra Dodo and a pack of starter dodos as well. Webmaster Matt Foxclaw was second beating Co-owner Jenni Eales who landed third.

We rounded off a weekend of the breeders fair with a 3 hour breeders bash and a cool 3k on the contest board for a back to school theme. 3 was the magic number as we had 3 DJ's as well each doing an hour. We started with Trynatie Carter who rocked our socks off then Matt Foxclaw took the stream over and we partied hard with him and finally Martin Glom wrapped up the session and had us shaking our thang old school style.

We had 4 winners taking home a share of that 3k prize well done to Summer Rose, EvaLou BlackRoses, Stang McMasters and Trynatie Carter

We also had more raffles than you could shake a salt stick at with so many of our breeders taking home some prizes for their much loved oYo breedables.

Think you missed out? Then join us on Sunday 18th October for a best in Pink contest with DJ Trynatie. 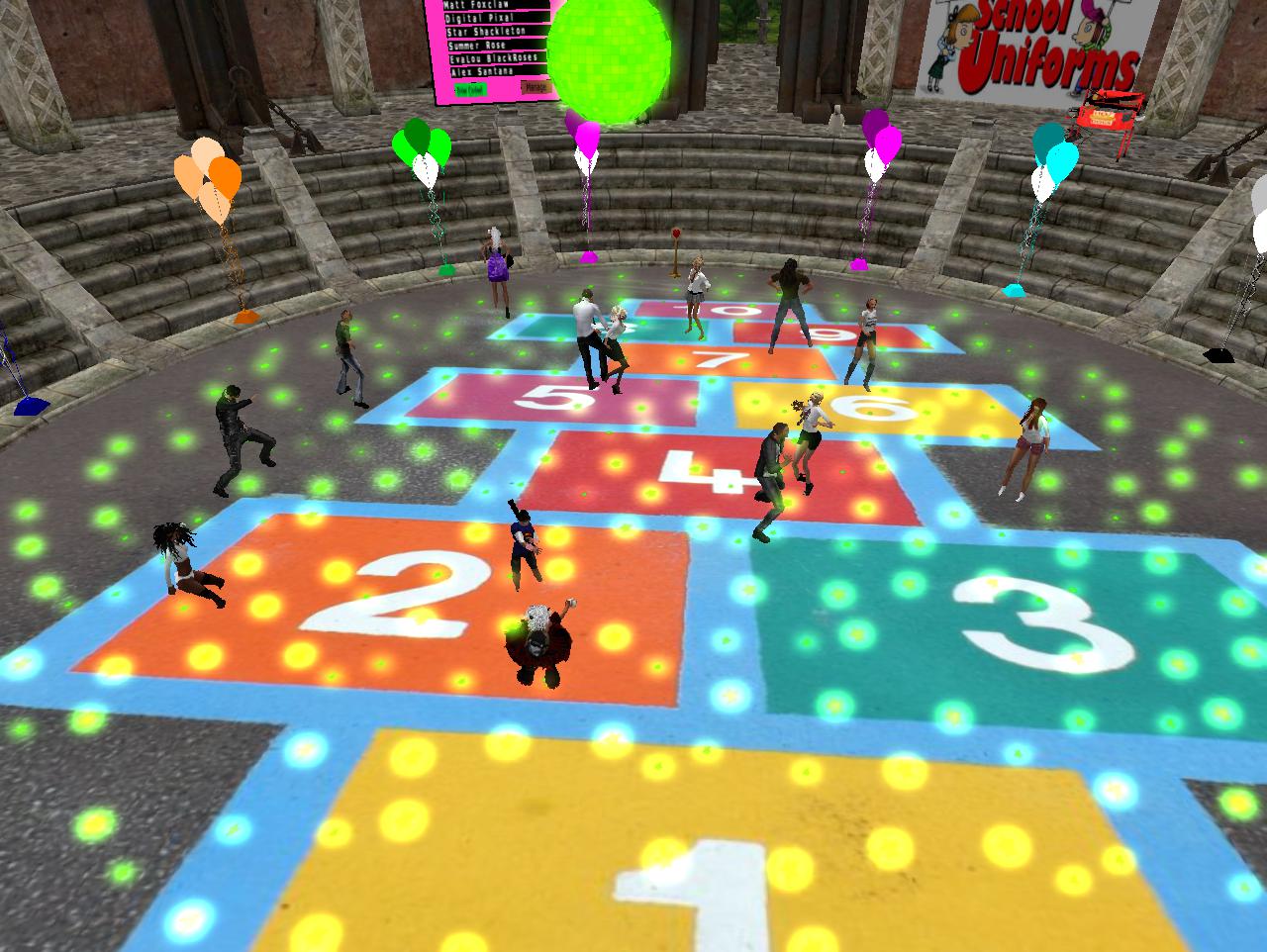 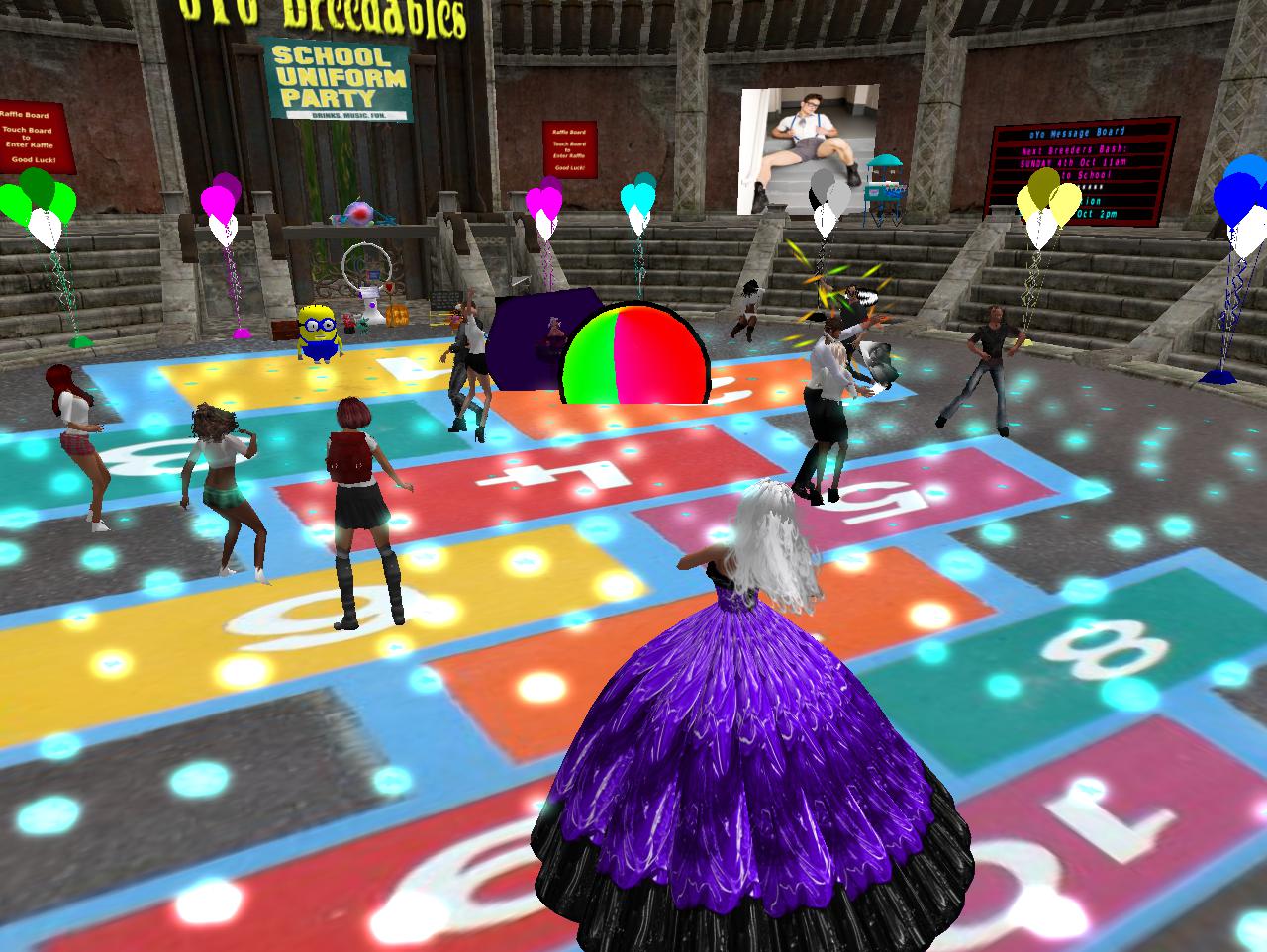 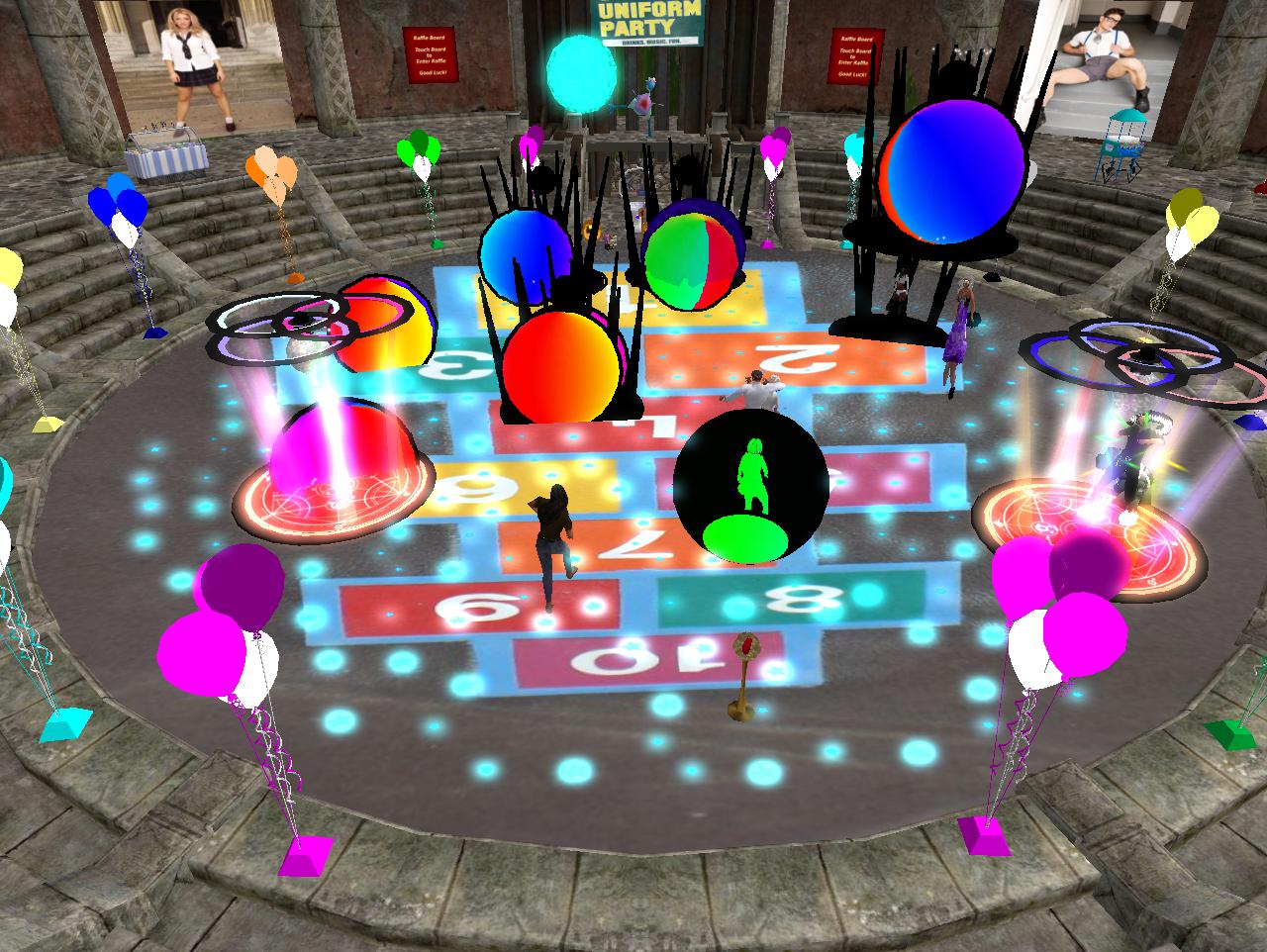 Dodo Race starting in 10 Minutes, Grab a dodo and join us dont worry if you dont have a dodo we have some you can use right here. Prizes for top 3 plus trophies and best dressed gets a little something so come dressed to complement your dodo or come dressed to impress either way just come and have some fun racing.http://places.inworldz.com/oYo Fantasy/164/246/1001

We lined up for a fun race, staff and breeders alike today and raced 3 times round the track. It was a close call but Webmaster Matt Foxclaw was just pipped at the post by breeder Digital Pixal who took first place. oYo's own Manager Kels Foxclaw crawled home to take third place.

Everyone looked very nice in their costumes with Digital also coming out on top for her native american costume.

The steeplechase race proved a bit more difficult for our skilled riders.

Fuzzy Friday was a Fuzzy Success!

Friday was the first day of our first oYo Breeders Fair and what a Friday it was. Fuzzy Friday as it was dubbed inworld started with the release of the New Knitted Fuzzies, Special food chests stuffed full of all your animals needs and the grand reveal of the photo contest 'my oyo and me' in which breeders were invited to submit a photo of them with their favourite oYo breedables and a guest judge picked out 3 winners who took home horse packs.

We then had a talk with co-owner Jenni Eales where Jenni revealed what is in the pipe line and developments that have been made such as the incorporation of a database and the alfa testing on the cats along with the reduction of prims for lives and bundles especially horses, along with some new areas oYo are looking at as well.

Then we had a Best Dressed Fuzzy Contest with 3 placed winners all taking home a trophy and a pack of the New Knitted Fuzzies including first place winner Summer Rose who also took home a pack of fuzzies.

We also had a Fuzzy only auction which was very well supported and alot of fuzzies went to new homes. Then we topped off the first day with a breeders bash with DJ Niteshade and a Best In Leather Contest and a cool 1000 izzies to be won plus we had raffles throughout the event as well. Breeders embraced the theme and came along with their fuzzies who had a dance of their own on the fuzzy dance floor (available from the fuzzy toy store).

So as Friday was such a success Saturday has alot to live up to so if your curious what all the fuss is about join us in world today from 10am for some more fun as we pay homage to the awesome dodos today.